In this post I will describe how I built a neural network to decode morse code. After a day of training it successfully decoded real signals. First I’ll describe the generation of morse code signals, the neural net, and finally the results.

You want the training data to match the real world as closely as possible. Unfortunately I couldn’t find a dataset with real world labeled morse code. Therefore I wrote a simple morse code generator that simulates a wide variety of signals:

As can be seen in the code the length of dots and dashes are varied randomly during the sequence to mimic the variations as a human would manually key the morse code. The sequence of dots and dashes is then modulated with a sine wave of variable frequency. Then white noise is added, the amplitude is varied and the output is clipped. During training the parameters to this function are varied randomly.

This is an example from the generator for the text “HELLO, WORLD”

Instead of feeding the audio straight into the neural network some pre-processing is done first. The audio is split into 20 ms windows, and the Fast Fourier Transform (FFT) is computed. This reduces each 20 ms of audio into a single vector of 21 values. This is done using scipy.signal.spectorgram.

The network used in the project is relatively simple. Usually for speech recognition the network takes in multiple seconds of audio at a time. This allows convolution across time to extract features before feeding it into the recursive part. However, I decided that I wanted a streaming approach where the processing can happen in real time. Therefore I only used a few dense layers, followed by an LSTM to handle the temporal aspect of the decoding. This allows me to put in samples as they come in. The LSTM is followed by another dense layer and a softmax. The softmax outputs any of the letters in our alphabet or a special blank token.

The network will predict a probability for each token at each time step, see picture below. A simple way to extract the sequence from this is by taking the highest probability token at each time step, and then remove duplicate and blank tokens. An example sequence would look like “–H–E-LL–LLL–O–” (with “-“” for blank), which will turn into “HELLO”. There are better algorithms, such as beam search, but the greedy algorithm worked fine.

For training we don’t just need to extract a sequence, we need to compute a loss from the model output to the desired sequence. For this a Contortionist Temporal Classification (CTC) loss is used. 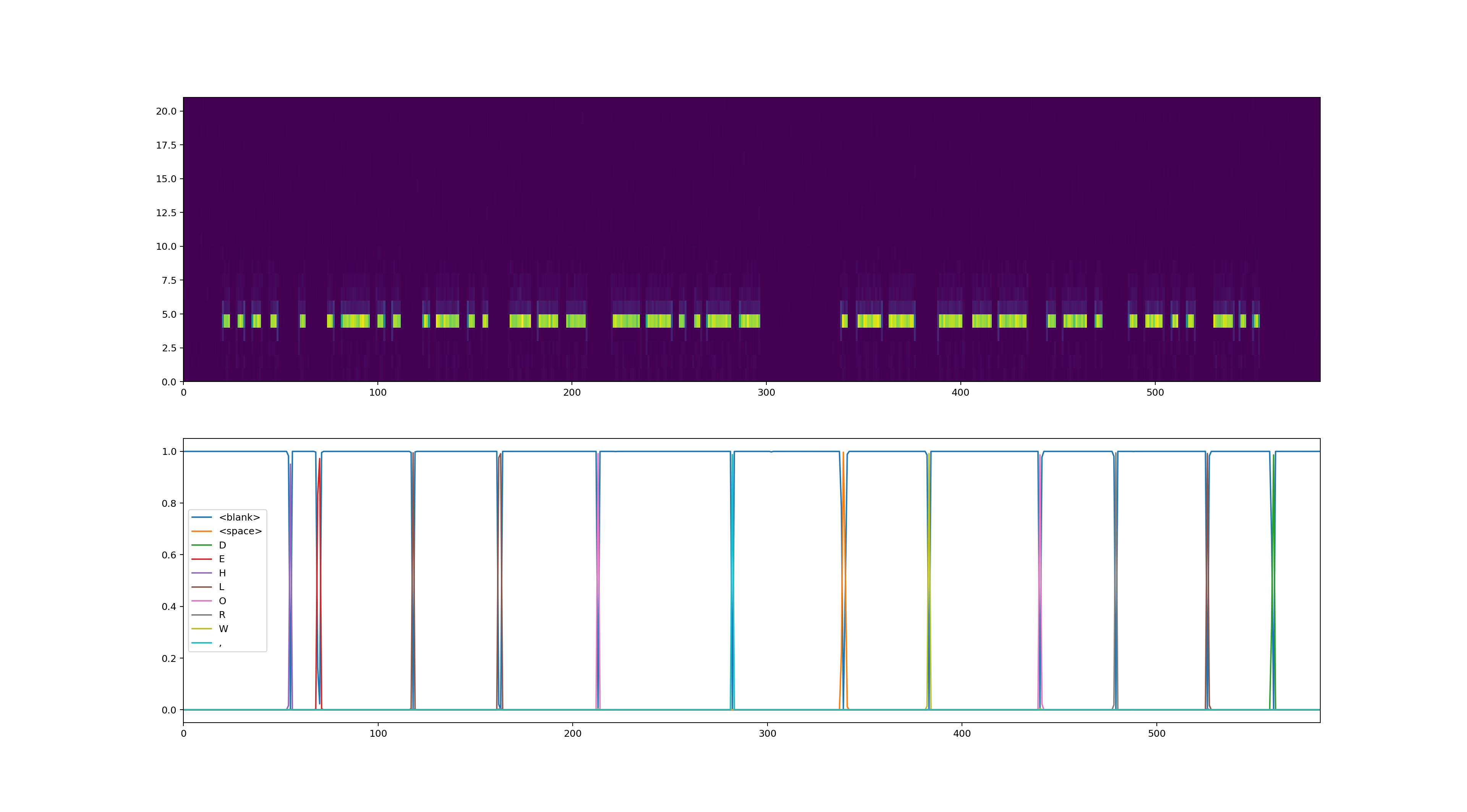 I let this model train for about half a day on a GTX 1070. At that point it had seen about 100 thousand examples segments of morse code. To test it’s performance on real world data, I used the on-line software defined radio from the University of Twente located in The Netherlands. I recorded some data on the 80 m band (3.5 to 4 Mhz), used by radio amateurs for morse code communications. Radio amateurs mostly exchange call signs on this band to prove they had contact. Let’s look at an example of a relatively weak signal.

The neural net decodes this as:

This is an interaction between US5WAF located in Ukraine and DF3WV located in Rennerod Germany.

The complete code can be found on my GitHub repo.